The Metropolitan Museum of Art was founded at a meeting held in the Theatre of the Union Club (The former Jerome Mansion) on 26th and Madison in the heart of NoMad.

There had been many attempts to formulate an art museum for the public in New York before this, but all had failed.  John Jay as president of the Union Club was key in having the club’s Art Committee explore the possibility of setting up a museum.  It was decided that the matter should be brought before a large group of interested New Yorkers, including members of other clubs — such as the National Academy of Design, the New York Historical Society, the American Institute of Architects— and prominent citizens in business and the arts — such as the Presidents of Columbia College and the Central Park Commission, leading architects and powerbrokers. 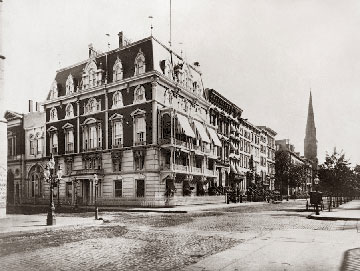 The meeting was held on November 23, 1869.  William Cullen Bryant, the famous American romantic poet, journalist, and long-time editor of the New York Evening Post, gave the keynote address to an enthusiastic crowd gathered at the Union Club.  Before the meeting was over, they resolved to establish a museum worthy of the City and the nation, named a committee, and empowered it with all the necessary authority to carry the work forward.

The committee, including some of the most influential men in New York, lost no time.  On January 17, 1870 the first officers were elected.  On April 13th of the same year the museum was officially incorporated by the State of New York and about a month later on May 24, 1870 the first Annual Meeting of the museum was held and its constitution adopted.

In 1871, by act of the New York State legislature, the Central Park Commission was empowered to set up a museum in the park.  After briefly being housed in the Douglas Mansion at 128 West 14th Street, the Metropolitan opened its current permanent home on March 30, 1880.  The original red and white Calvert Vaux and Jacob Wrey Mould building is still visible in the center of today’s museum.

When they met on that cold rainy November night right here in NoMad, they had no money, no building, and no collection, but what they accomplished overwhelms anyone walking through the museum today.