The History of the NoMad Name

Over 13 years ago, the area running roughly from Sixth to Lexington Avenues, from 23rd to 30th Streets was first identified as NoMad, but over the years, the area has had varying geographic definitions. 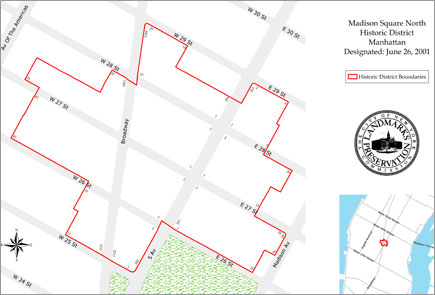 In an article in The New York Times on August 5, 1999, Elaine Louie defined NoMad as extending from 23rd Street to 34th Street, between Madison and Second Avenues.

Sanna Feirstein, in her 2001 book Naming New York, identifies NoMad as extending from 23rd to 34th Streets, from Sixth to Park Avenues. 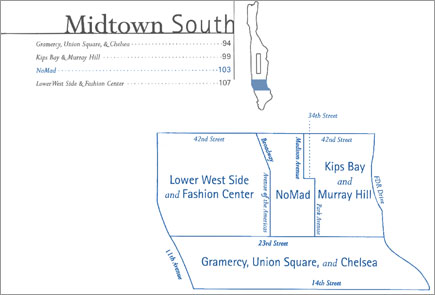 The recently opened hotel at 28th and Broadway was named The NoMad Hotel several years ago during its planning stages.  The owners named the hotel after the Madison Square Park North Historic District.

In a feature article, “Soho. Nolita. Dumbo. NoMad?” in the April 19, 2010 issue of New York magazine, the area was mapped as running from Broadway to Park Avenue and from 23rd to 34th Streets. 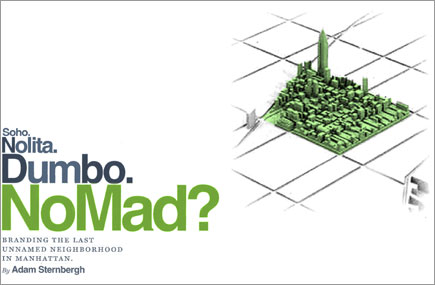 An article in The New York Times of March 30, 2012 on neighboring Flatiron made a point to explain what comprises NoMad.  They noted that we know as Flatiron is a huge area from 23rd street running down to almost Union Square and that NoMad is the neighborhood that falls in between Flatiron and Midtown (23rd to 34th Streets). 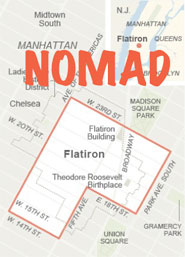 On May 11th, 2012, The New York Times ran an article on Madison Square Park and identified the NoMad area as an example of the impact of the renovated Madison Square: “’It (NoMad) is like the Flatiron district before it gentrified,’ said Mara Flash Blum, a senior vice president of Sotheby’s International Realty, who lives nearby. ‘It’s like the Old West: You see the tumbleweed coming, and all of a sudden you’ve got the new stagecoach town.’”

Now, the name appears ubiquitously to identify the location of restaurants, bars, nightspots, hotels and real estate offerings in the area.  Here are just a few examples:

Tavern29 in Urbandaddy:
“Three Levels of Tippling and Sausage in NoMad. Introducing Tavern 29, three levels of ambitious cocktails, hefty burgerage and a spontaneously German rooftop from the good folks who brought you Stone Street Tavern, opening Monday in NoMad.”

The Neighborhood in Travel and Leisure:
“Considering its position at the heart of Manhattan—as central as central gets—it’s a bit odd that the area between 26th and 30th Streets, Park Avenue and Broadway didn’t, until recently, even have a name . . .  The tide began to turn with the 2009 arrival of the Ace Hotel, whose restaurants and lobby bar were soon luring trendy downtowners to its obscure patch of Broadway. Other pioneers followed. Yet if urban renewal has a tipping point, the just-opened NoMad Hotel is it. Named for the neighborhood’s newfound acronym (NOrth of MADison Square Park), the 168-room property is a collaboration of Andrew Zobler, developer of the Ace, and Will Guidara and Daniel Humm, the duo behind Eleven Madison Park, the best restaurant in New York City at the moment.”

The Gansevoort Website:
“Gansevoort Park Avenue is centrally located in the architecturally interesting neighborhood of NoMad (North of Madison Square Park).  The area is rich in history and within close proximity to award-winning restaurants, distinctive shopping, and Manhattan’s most celebrated attractions including the Empire State Building, the Theatre District, Times Square, Bryant Park, and the New York City Library.”