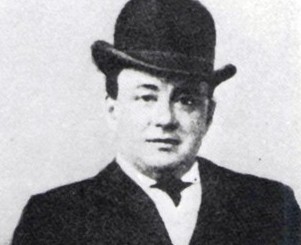 This is the third installation of a three-part article Satan’s Circus:  Broads, Booze and Bets.

Madison Square Park North Historic District (NoMad) was landmarked in 1999 because it reflects so much of New York’s past.  Just one aspect of the neighborhood history was that it served as the heart of New York gambling at the end of the 19th Century.

The Bowery Boys point out that “there were hundreds of illicit gambling rackets, called ‘poolrooms’ in the city in the late 19thCentury, usually alongside the seediest taverns, brothels . . .” One operator alone, Frank Farrell, is said to have had 200 illegal gambling houses in the city.  Many of these lined Broadway and its side streets.  The industry began just after the Civil War in lower Manhattan and slowly moved uptown.

There was a clear link between gambling and the New York Irish Gangs that with political connections made it easy for parlors to operate unimpeded.  One has only to look at the case of John Morrissey.  Morrissey was convicted both of assault and battery and assault with the intent to kill — before he was 18.  Yet he would go on to become a prizefighter and gambling operator.  His gang, the “Dead Rabbits,” worked with Tammany hall to run gambling operations that the police could not touch.  A criminal?  Perhaps, but he went on to serve two terms in the US House of Representatives and a term as a Democratic State Senator, dying with an estate of over $2 million — a huge fortune at the time (equivalent to about $46 million in current dollars).

By the last quarter of the 19th Century, famous operators like Morrissey had moved their operations uptown along with the center of the city to what was Satan’s Circus and is now NoMad.  There are reports of numerous gambling houses in the neighborhood, but many leads wind up at a dead ends.

We will never know how many houses of gambling there were in Satan’s Circus, but there were likely many more famous one’s like those we have covered here and a legion of smaller, less elaborate ones.   The trial of Captain Alexander Williams, who famously coined the term “Tenderloin,” gives a pretty clear picture of the extent of the gambling and just how corrupt the police force was in ignoring gambling, among other criminal activities.  We’ll, come back to the trial later, but first let’s look at some of the more famous NoMad gambling house operations we can still identify. 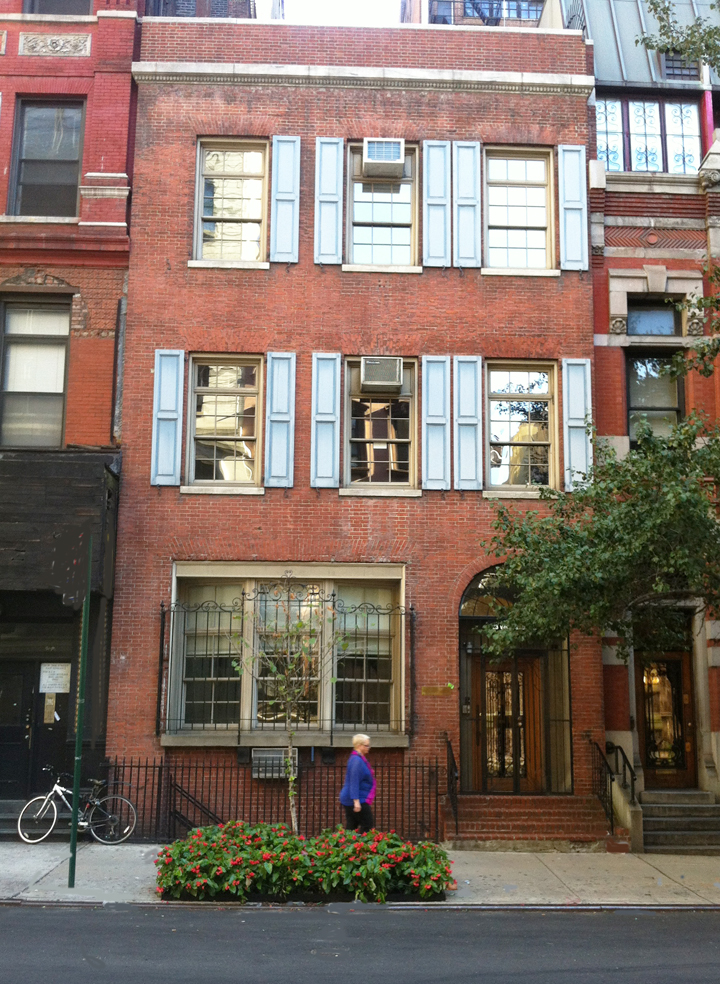 Among the most famous New York gambling empires was that of Richard Canfield, know as “America’s Greatest Gambler.”  A trip to Monte Carlo had taught Canfield what true gambling elegance was, and he sought to recreate it in The Madison Square Club, which he opened in 1888 at 23 West 26th Street, catty corner to Delmonico’s.  The building is still standing.

House-banked games, Faro and Roulette occupied the first two floors.  Some claim poker was not offered, while others say it was played on the second floor.  The top floors were living quarters for Canfield and his employees.

The decor of the Club was dignified, comfortable, pleasant — a stark contrast to the loud, gaudy parlors that dominated New York at the time.  It was distinguished, too, for being an honest operation.  While almost every American gambling hall cheated players, Canfield learned that house-banked games assured the casino could be run profitably as well as honestly.  He was a gracious host and treated his guests to fine wine and lavish dinners.  Popular with gentlemen of means, the Club soon became one of the New York City’s premier palaces.

Later, Canfield would open the most extravagant of New York gambling parlors at 5 East 44th Street — known as the most popular gaming resort in the United States — and would buy the famous Club House in Saratoga Springs, spending nearly $1 million renovating it.   Canfield became a celebrity himself and a friend of William McNeill Whistler, amassing the second largest collection of the artist’s work.  He met a very “New York” death when he suffered a concussion in a fall on the stairs of the 14th Street subway station. 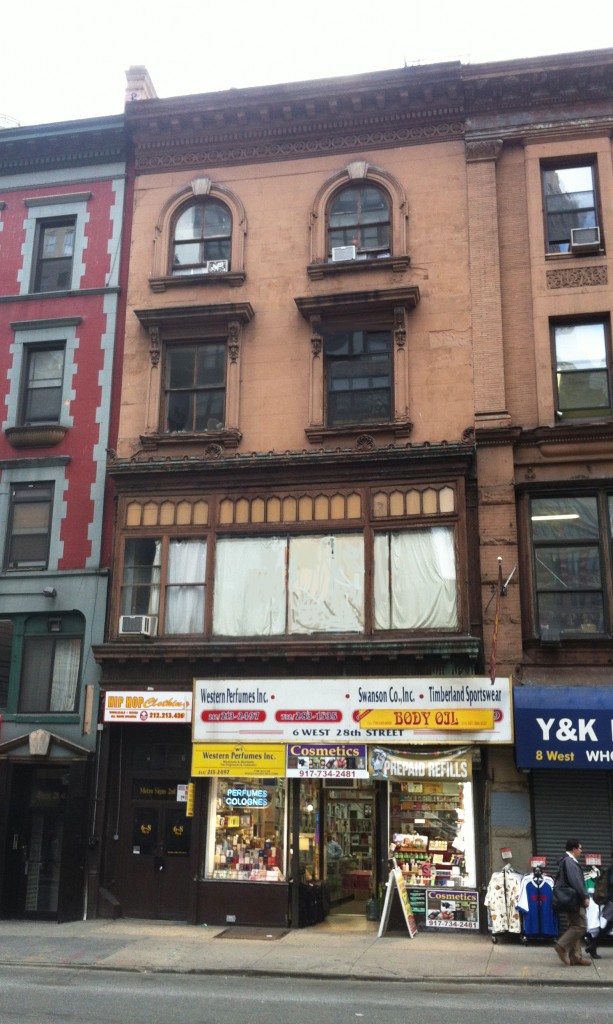 Today, 6 West 28th Street is an ancient, peeling brownstone, but its present state betrays the fine quality of this beautiful residence built in 1855.  (The second floor was likely altered in 1913 to include the show window on the second floor in Gothic or Moorish or Greek style or maybe all three, by the architect William Lauritzen.)  In the later half of the 19th Century, the tenancy of this neighborhood and this fine house began to change and the records show that the house, which still stands, was one of those raided by the police as a gambling parlor.

John Daly, reputed to be the wealthiest gambler in New York at his death on April 26, 1906, opened a gambling house at 39-41 West 29th Street in 1885. The original building is gone, replaced by a commercial building erected in the early 20th Century.  Nevertheless in its day — the “wide-open days” of New York, “John Daly’s” was a nationally known house of gambling that remained opened for nearly 20 years.  Interestingly, such a notable establishment did not even appear in the list of locations uncovered during the Williams trial (see below).

Daly, like his mentor, Morrissey, was someone who played both sides of the track.  A known gambling promoter for 30 years, he also served for a time as a congressman shortly after the Civil War.  He was known as a philanthropist and a generous employer and even when his houses were closed by the police he kept his employees under pay and permitted them to make homes of his clubhouses.

The Trial of Captain Williams

There are probably two reasons we cannot identify additional houses of gambling: 1) they were trying to hide themselves from honest policemen and lawmakers as well as anti-vice preachers; and 2) the corrupt authorities ignored gambling operations, and hence, there are few public records of prosecutions, arrests or convictions.

Indeed, the infamous Captain Alexander (Clubber) Williams, the head of the 29th Precinct — The Tenderloin Precinct, was put on trial by the Board of Police Commissioners for failing to suppress gambling in his precinct.

Captain Williams made no previous report that the houses raided were suspected of being involved in gambling and naturally had not brought charges against them.  Instead, he contended that he and his police force were unaware or unable to detect any gambling operations in the area.   He went as far as to say he had seen known gamblers hanging around the streets and surmised that they were there because there was no gambling action going on due to the presence of his men’s surveillance or the neighborhood.  All of this, despite that the Superintendent of Police’s own son had confessed to gambling in the 29th Precinct and it was his confession that lead to the investigation of the houses raided.

While it was clearly it was bribes that blocked his ability to see illegal gambling operations, William’s was not only exonerated of failing to suppress gambling crimes but also was advanced to the post of Inspector.

Fifty-five witnesses, including clergymen and prominent businessmen, swore that several hundred complaints against the district had been filed in the preceding 18 months that only one establishment had been raided.  Pondering this and the fact that six gambling parlors were uncovered as the result of a single investigation, resulting from the Superintendent’s son’s complaint, one wonders how many gambling houses flourished in a Satan’s Circus awash in bribes and corruption.