NoMad Projects Reaching for the Skies

After a few years of intense development, NoMad is seeing a number of projects reaching completion. Recently, the 55-story Viñoly tower at 277 Fifth Avenue finished being sheathed in its curtain wall and Madison House, at 15 East 30th Street, the tallest condo in Nomad, began to market its apartment offerings.

The latest news, however, is that three projects are progressing at surprising speed and are all likely to be completed in 2020.

A new hotel at 250 Fifth Avenue has just reached its full height at 230 feet and promises to be an exciting addition to the neighborhood when it is completed in 2020.  It is being built as an addition to the historical McKim, Mead and White structure completed in 1907 for the Second National Bank that sits on the corner of Fifth and 28th.

The beautiful neoclassical McKim Mead and White building will be incorporated into the hotel, preserving the landmarked façade and giving the neighborhood a terrific blend of old and new.  Sensitively designed by Charles Platt of Platt Byard Dovell White Architects (Perkins Eastman is the architect of record) the façade of the high-rise hotel will emulate the contextual and architectural idea of the original five-story building, with light-colored precast concrete stones and vertical bands of closely spaced windows that run the length of its exterior.  At the same time, the seamless ground-floor façade along 28th Street will unite the buildings and create a harmonious combination of past and present.

The first two floors will contain the main lobby, a cafe/restaurant, and a library, while the hotel’s 188 rooms will reach all the way up to the 23rd floor. On the ninth floor, there will be an outdoor terrace and bar, while the top of the 23-story building will have an event space with additional outdoor terraces overlooking Madison Square Park and the surrounding skyline.

It was recently announced that the team behind popular restaurants like Locanda Verde and Bar Primi, the Noho Hospitality Group, will be opening a new project in the luxury hotel, but details on its location—at the base or the ninth floor, the name and the focus of the restaurant—were not forthcoming. 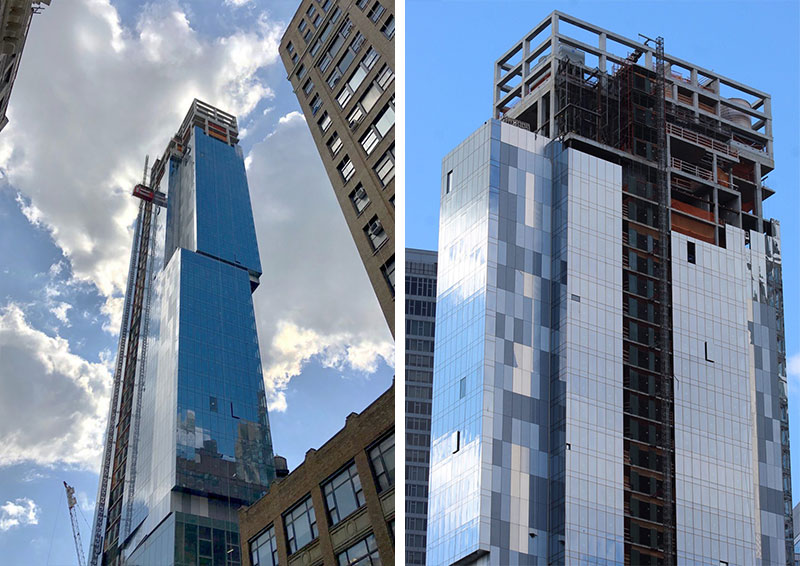 The curtain wall on the Virgin Hotel is almost complete as the hotel sprints to a 2020 opening. Originally slated for 2018, the hotel is likely to be both an eye-catcher and a landmark in the development of NoMad. When completed, the Virgin will rise 476 feet and contain 460 hotels rooms on 38 floors. The hotel will also contain 90,000 sq. ft. of retail in its podium base, an outdoor swimming pool, lounge areas, and a 22,000 sq. ft. golf store.

The new hotel will be standing on hallowed New York ground. On the Virgin block (from 29th to 30th on Broadway), famous theatres created “The Great White Way” including  Daly’s Theatre, Palmer’s Theatre, later renamed to Wallack’s Theatre (1888), the Imperial Music Hall opened at 1223 Broadway (1892), which later gained popularity after it was leased to the vaudeville comedy team of Joe Weber and Lew Fields in 1896. The Weber and Fields Broadway Music Hall staged an array of comedies, musicals, vaudevilles and burlesques.

The blocks immediately west of the Great White Way provided a raunchier scope of entertainment. An almost-continuous row of brothels lined West 29th Street west of Gilsey Hotel and Daly’s Theatre, serving a broad range of clientele. The most notorious of the nighttime haunts stood next door to Daly’s Theatre. The Argyle Theater first opened in 1872 on the southeast corner of the intersection of Sixth Avenue and West 30th Street. Now known as the Haymarket, the venue became the city’s top destination both for rowdy performances and the ladies of the night. Though the theater opened chiefly onto Sixth Avenue, a 1911 New York Times article confirms that the 12,055-square foot property was triangular-shaped, with its narrow end extending all the way to Broadway. Sitting adjacent to Daly’s Theatre, the corner was occupied by a five-story townhouse with retail at ground level and a mansard roof making up the top floor.

The footprint of the new Virgin Hotel encompasses all of these plots.

It seems like yesterday that the Ritz Carlton Hotel at 1185 Broadway was breaching street level.

Now the hotel at Broadway and 27th Street has surpassed the five-story podium level and formation of the floor slabs for the main hotel portion is well underway. The smaller and narrower floor plates above the podium will accelerate the pace of construction, allowing the Ritz Carlton to quickly gain prominence above its relatively low-rise surroundings. Yimby reported that the metal clips for exterior panels were already in place around the base heralding the beginning of installation of the curtain wall.  With such progress, the hotel is well on its way to its anticipated completion at the end of 2020.

When finished the hotel will rise 580 feet from the ground and its 40 stories will contain 250 guest rooms and 16 residential units.  It will have a 4,000 sq. ft. landscaped plaza that will lead to the entry and a glass staircase that will lead to the facilities within the podium levels.  A restaurant and bar will be accessible from outside and through the hotel lobby on the ground floor and there will be a rooftop bar as well.

The hotel’s design by Rafael Viñoly is marked by six strong vertical elements that seem to be “bound” by the thin black articulation delineating each floor, creating a changing but unified effect from the podium level to the roof 40 floors above.