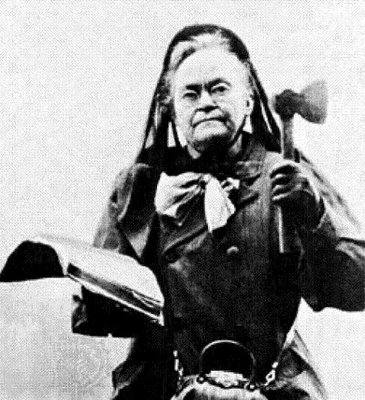 Mrs. Carrie Nation, famous for breaking up liquor bottles and bar tops with her hatchet, was a PR pioneer who certainly knew how to build interest in her upcoming lectures.  When Mrs. Nation came to New York, she always stayed at one of the city’s leading hotels in the heart of the city — the Victoria Hotel on 27th and Broadway. Then, she attracted crowds for her lectures by making numerous dramatic visits to civic leaders and well-known bars.

On one occasion she traveled downtown to see the police commissioner and mayor, returning by carriage to John L. Sullivan’s saloon at 1177 Broadway, between 27th and 28th Streets.  The renowned heavy weight-boxing champion had proclaimed to the press that if Nation ever bothered to stop by his place, he would “thrust her into a sewer hole.” 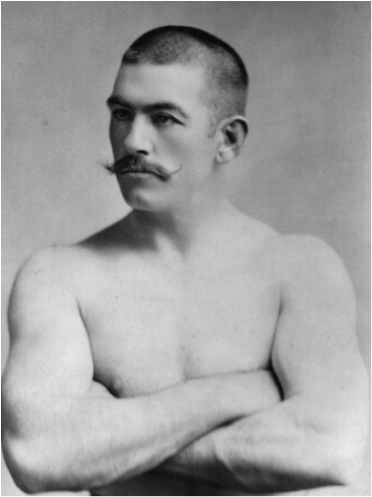 People were a lot more colorful then, and Nation was going to settle accounts.  She sat in her carriage in front of Sullivan’s saloon and sent her card up to him.  She was told he was asleep and could not be bothered.  She insisted that he see her because “I don’t allow any man to stick me in a sewer hole — not while I have my hatchet with me.”  The messenger responded, “Better not ma’m.  Mr. Sullivan is a very dangerous man when he’s ‘roused, ma’m.  He gettin’ old, but there’s lots left in the old gent yet, and my advice is to get out and not bother him.”  Unimpressed, Mrs. Nation replied, “Tell Mr. Sullivan, then, that when I next come to town I will visit him and see if he’ll stick me in a sewer hole.  I’ll see him and there’ll be a reckonin’.”

Nation didn’t get to see Sullivan, but next day The New York Times subhead read “John L. Goes into Hiding.”   It seems even the most famous fighter of the day was afraid to confront her.